Hallmarks are used by the Royal Mint to identify the date, mint mark, and other information about each coin that it produces. They’re also used to authenticate antiques that were produced before the introduction of modern technology in the early 20th century.

Learn how to decode them and what they mean.

The Royal Mint uses three different hallmarks to identify its products. The first two are the year and mintmark, while the third identifies the type of metal being used. The year is usually stamped at the top left corner of the coin, followed by the mintmark. The mintmark is usually stamped below the year.

If you’re thinking about purchasing silver made in the UK, you want to make certain that what you’re buying is pure silver. Otherwise, you may be paying a lot of money for something that isn’t worth much at all. In order to identify the pieces you’re buying as true silver items, you need to understand British silver hallmarks. Here’s a quick rundown of what these marks include. 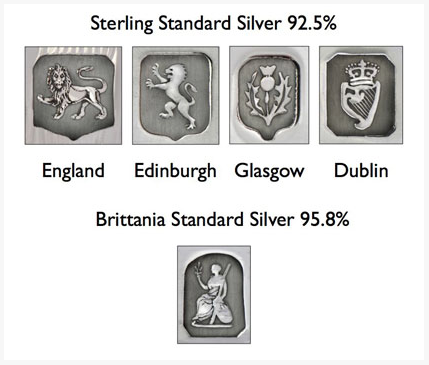 The first step to identifying silver hallmarks is to look for the standard mark. There were five different marks used on British silver, and they’re easy to recognize. They are the walking lion, the standing lion, the thistle, the crowned harp, and the symbol of Britannia. If you can’t find one of these marks on the item, it was likely silver plated or was made elsewhere.

The next mark to check for is the town mark. This mark identifies where exactly the piece was manufacture red. There are a number of these silver hallmarks, so you may need a reference guide to determine what town the mark on your item represents.

The duty mark was only used between 1784 and 1890. It indicated that a duty was paid on the silver. Older items may have the King’s head, indicating that the item was made between 1784 and 1837. When Queen Victoria took the throne, the mark was changed to the Queen’s head. These antique silver hallmarks are useful in determining when a piece was made.

This letter indicates when the silver piece was made. The letter changed periodically, and each town often used a different font or even a different letter. Again, this is something that you will need to use a guide for, and you’ll need to determine the town mark first.

Finally, there’s the marker’s mark. This mark is the symbol or initials of the maker or manufacturer. It’s the final piece needed to determine exactly where, when, and who made the silver piece.

Important Tips For Cleaning Your Silver and Antiques
Antique Silverware Appraisal Near Me: Know What’s the Current price of Silver Flatware
Everything You Need to Know About Identifying -Silver Flatware Marks Identification Guide
How to Identify a Wm. Rogers Silver Plate? History of William Rogers?
Best Way to Sell Antiques: 10 Tips for Making Money from Antiques
Selling the Family Silver: Beware of Smelters Who Can Smelt Your Treasure into Trash
Tweet
Posted in Antique Collection, Antique Dealer, Antique silver, Silver Hallmarks,