Have you ever wondered how some antique silver pieces can contain such detailed and extravagant designs? It is through a metal working process known as Repousse /rəˌpo͞oˈsā/. It is a French word that means “pushed back” and it relates to the labor intensive way the metal must be carefully manipulated by a skilled silversmith. It is a combination of skilled technique that dates back for thousands of years, but some of the top master metalsmiths have left a Repousse legacy.

In fact, repousse is such a large and distinctive aspect of antique sterling silver in American history that it is commonly referred to as Baltimore Repousse. Baltimore, MD became known as a hotbed of aspiring and highly skilled silversmiths that manufacturing firms settled down there. As more and more of the repousse sterling silver patterns emerged from these talented firms, some of the most well-known makers today got their start in Baltimore during the mid-19th century emergence of this praised metal working technique. 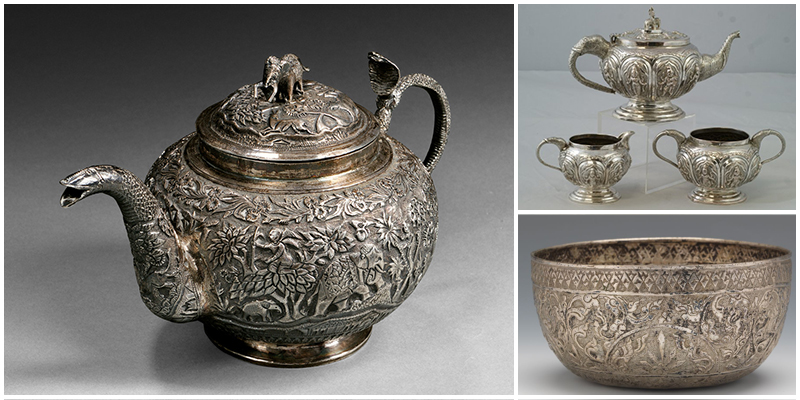 Baltimore repousse was an expensive luxury reserved for the rapidly emerging wealthy class. It replaced most of the colonial style 925 silver on the tables of debutante balls and dinner parties, also French traditions. Most repousse sterling silver pieces were hand hammered, embossed and even gently pressed from the reverse side, but some, like flatware, were made using a press mold. However, the antique silver markings would be stamped onto each valuable piece. Identifying those markings today can help an antique silver dealer valuate your piece.

The Who’s Who in Repousse Silver

Some of the most valuable pieces today bear the markings of names like:
Tiffany & Co
Jenkins and Jenkins
Schofield Company
Stieff Silver Company
And Samuel Kirk, the silversmith who is credited the most with bringing repousse sterling silver to Baltimore.

Stieff and Kirk later merged while some of the silver manufacturing firms were handed down to sons and merged with other partners in the 20th century. The Baltimore firms are no longer operational today. Steiff and Kirk were eventually bought up by the famous Walter Scott Lenox of which we know as the American company today; Lenox.

Tiffany Repousse silver is some of the most valuable on the market today. A single spoon can bring hundreds of dollars. Stieff Repousse sterling silver is also highly sought after by collectors. If you have a piece of silver, or a set, hollowware or flatware, it is important to know what you have. Just because it may have an intricate design doesn’t mean it is worth top dollar. Even some of the famous names in silver made silver plated pieces.

Taking your pieces to a professional will allow you to have your crafted piece of history evaluated and assessed. Antique silver buyers will be able to tell you, based on the markings, who made your piece of repousse sterling silver, when it was made, if it is sterling silver or silver plated as well as the town it was assayed in. All of these factors play a vital role in determining the value to you and the value to collectors should you decide to have your piece formally appraised for estate purposes or to sell at auction.

Great deals on antique wares are only a click away!
Where can I Look Mine up and What do they Mean
Markings on Silver
Is Your Antique Silver Solid or Plated? A Guide
Antique Silver Tea Sets - Best Tips for Prolonged Use and Beauty Retention of the Set
Quick and Smart Ways to Get the Actual Prices for Antique Sterling Silver Trays
Posted in Antique Collection, Antique silver, Antiques, Silver Markings, Silver tea sets,